The Secrets of a Neophyte 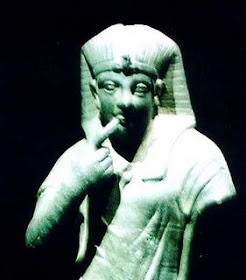 In the ceremony of Reception, the candidate is instructed in the secrets of the Neophyte grade. These are the modes of recognition present in most mundane organizations and societies, as well as to other esoteric orders of this nature. It is common for students of the Order to spend much time studying other features of the basic rudiments of Occult science, and neglect the grip and word as mere `claptrap`not worthy of attention. Any attempt given to understanding the import of these symbols is not a wasted effort by any means, for they are in fact of great importance. Even a small amount of study by the new Neophyte magician will reveal why these are indeed considered to be `the secrets of the grade`.

The secrets of a Neophyte consist of a step, two signs, a grip, a word, and the password.

Firstly, the left foot is advanced about six inches: this is called the step of the grade. It is given at the threshold of the pillars, as if stepping up to the entrance way. This is symbolic of being about to enter the Order. While the Neophyte Ceremony of Reception takes place clearly in the Hall of Neophytes, the paradigm being revealed here is on another level. As a Neophyte, we symbolically approach the gate or first pylon leading to our Initiation in Zelator, for if the grade of Neophyte is our Reception into the Order, Zelator is the Initiation into its pale. Like in the Masonic first degree, these pillars represent the porchway or entrance to King Solomon`s temple, but unlike most masonic temples, these pillars are covered with Egyptian hieroglyphs emblematic of the journey of the soul. While the Neophyte has just approached the gate of initiation with the step, he has not yet entered it as an Initiate, here he is still a tyro.

The sign is two-fold; the saluting sign and sign of silence. The first should always be answered by the second. The saluting sign is given by thrusting both arms horizontally forward, palms downwards. This method of delivery of course differs slightly from temple to temple, depending both on the specific branch of the GD fraternity one may belong to, as well as the local traditions inherent in each temple. In my opinion, we ought to follow the masonic tradition inasmuch as that it is important to continue to perform any sign or ritual as one was originally shown. This is one way to preserve the beautiful variety and history that each of our GD Orders has in their similar, but individual work. I do not personally recommend trying to adapt to or copy the methods of the temple you are visiting if they differ greatly from your own, for another magician noticing these differences, might comment upon such, and thus provoke a thoughtful conversation later that might have been missed if one behaved `(as if) in Rome`. However, if one takes up an officer position in another temple or joins a new organization, the onus is on the officer to be faithful to the tradition of the new organization he purports to be a faithful exponent of!
The saluting sign alludes to the Neophyte`s condition in a state of darkness un-illuminated by the lamp of secret knowledge and groping his way blindly in the search for truth. The use of this sign is frequent in magical practice, so common as to be of universal usage, meanwhile it is not often known by other solitary magicians that the GD Order was its original origin.

Interestingly enough, there is one secret of its usage that is so commonly under-utilised it is perhaps a procedure not readily known. The saluting sign may be used as a simple but effective form of elemental invocation. Depending on which of the fingers or thumb is extended when giving the salute, the corresponding element is said to be invoked. The attributions are as follows:

Like most traditions and attributions in the Order, this is the secret or esoteric system which of course differs from the more common or exoteric attributions familiar to students of classical palmistry, which are of course:

Both systems of attribution of course have their merit, and GD students familiar with some of the details of the higher grades will of course also recognise a certain appropriateness of these exoteric attributions given here alongside the Order`s teachings on the subject.

The sign of silence is given by placing the left first or forefinger on the mouth. It signifies the wisdom of the Greek Harpocrates the child, who suckles his own finger, and it alludes to the strict silence inculcated at your obligation regarding all proceedings of the Order.

The use of the fingers for elemental evocation as described above, may of course be extended to the performance of sign of silence. It should be noted that the use of a specific finger for elemental invocation allies the 0 = 0 sign to the Hebrew letter Yod, which of course means an open hand or pointing finger. In the Sepher Yetzirah, the property of Yod given is sexual love, or as I interpret it, the sense of touch. This is fitting, for as the sphere of sensation or `the sphere of the elements` is Malkuth, so too is the pylons the Neophyte approaches the gate to that sphere.

The grip or token is given in the following manner: advance your left foot about six inches touching that of the brother or sister in front of you, side to side and toe to heel. The hand is extended as if to grip the brother`s but it is intentionally missed, and again extended seizing only the fingers. This alludes to the seeking for guidance in darkness, and finding it, but not by some supernatural agency or answers to the deeper questions in life, but from within the order by the helping hand of another seeker on the path. The import of this cannot be over-emphasised, though in our intellectual pursuits is sometimes undervalued. It is the path of light, and as the chain of adepthood passes back through time, so too do the living representatives of the Order also deserve the same appreciation and respect as their ancient counterparts receive. For if the modern Adepts are truly the clear representations of the Adepts of the past, they will duplicate this respect and courtesy upon every member of the Order regardless of grade, as well as upon those from other GD orders, and indeed to all of mankind in general.

The grand word is HAR-PAR-KRAT is the title of that same Egyptian god of wisdom and silence, and is a reminder of the wisdom of the strict silence the new member has sworn to maintain not only only about the word, grip and signs, but about all concerning the Order. I will post more on this topic of secrecy later.

The password is a term periodically changed at each equinox so that a member who has resigned or demitted may be in ignorance of it, and may not enter the temple. It is notable that in the current state of affairs, the password is also is something that is unique to each Order of GD, and therefore has come to also represent the unique variations present in each groups magical current.
Frater YShY at 10:58 PM